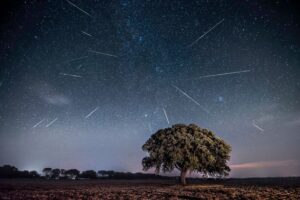 Although the nights are still short they are slowly lengthening. There will be a ‘Glorious Twelfth’ for astronomers this month. On the 12th of august we will see the maximum of the Perseid meteor shower. One of the most reliable displays of shooting stars. In addition the giant planets, Saturn and Jupiter are at their closest and brightest.The Plough lies north west with the ‘W’ of Cassiopeia at the same height in the north east. The four stars that make the square of Pegasus are becoming more noticeable in the north east and the summer triangle of stars Altair, Deneb and Vega are still very dominant in the summer sky. Arcturus is dropping to the west while Antares is now past its best.

The southern part of the sky is still taken up by the formless Hercules, Ophiuchus and Serpens. Yet more dull constellations are appearing low in the south east; these are Capricornus, and Aquarius, and although both lie in the zodiac there is nothing else to recommend them.

An indication that summer is drawing to a close is the return of Orion the hunter in the eastern pre dawn sky. Sometimes called the ‘Ghost of the shimmering summer dawn’. If you’re up early and have an unobstructed view to the east, be sure to look in that direction in the hour before dawn, The Hunter, recently behind the sun as seen from our earthly vantage point and now ascending once more before sunrise. The Hunter rises on his side, with his three Belt stars; Mintaka, Alnitak and Alnilam pointing straight up. This August, there’s a very bright object not far from the Hunter, also in the east before sunup. It’s the planet Venus. Watch for them both.

Venus is lying very low in the west after sunset, falling below the horizon around 9.30pm. At magnitude –4.0, only its brilliance makes it stand out against the bright twilight this month.

Mars at magnitude +1.8 and Mercury at magnitude –0.5, are also very low on he horizon to the lower right of Venus, and set around 9pm.

There is plenty more planetary action in the south east, as the Solar System’s two gas giants both come closet to the Earth this year.

Saturn will be reaching its near point on the 2nd of this month at a distance of 1337 kilometres away. Saturn is visible all night long, in the constellation of Capricornus at magnitude +0.2. Using a low power telescope you should be able to view its famous rings and the largest of its 82 moons.

Jupiter shines bright at magnitude –2.9 in the constellation of Aquarius. Also visible all night long. Jupiter passes it’s nearest to Earth on 20th of the month, at a distance of 600 million kilometres away. Holding a good pair of binoculars steady observe the four largest moons and the cloud patterns on its gaseous surface.

Neptune can be found on the other side of Aquarius at a faint magnitude of +7.8 after 9pm.

Uranus, located in the constellation of Aries, has a dull magnitude of +5.7 and rises around 11pm.

At 3am on 3rd August, the Moon comes close to the upper section of the Hyades star cluster with Aldebaran and the Pleiades above.

On the 9th of this month look carefully to the right of brilliant Venus to see the young Moon. Below its narrow crescent are Mercury, with the fainter Mars and the star Regulus.

The following night the crescent Moon lies between Venus and the faint trio of Mercury, Mars and Regulus.

On 11th August the Moon continues to team up with Venus.

21st of this month sees the full Moon get close up a personnel with Bright Jupiter.

On the three nights from the 28th onwards the Moon will be dancing with the Hyades and Pleiades star clusters along with Aldebaran, in the constellation of Taurus

He nights of the 12th and 13th August will be the maximum of the Perseid meteor shower. With the Moon setting below the horizon before 10.30pm, this will be an excellent year for observing its abundance of fast, bright shooting stars. The Perseids are connected with comet Swift-Tuttle which was discovered by Lewis swift and Horrace Tuttle in 1862. The comet takes 133 years to orbit the Sun.

Phases of the Moon :-