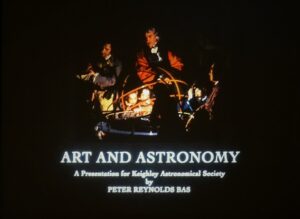 Mr Reynolds opened his presentation with favourite painting of his. A Philosopher Giving that Lecture on an Orrery, in which a Lamp is put in the centre in the Place of the Sun The artist Joseph Wright first exhibited this painting in 1766. At its centre, a red gowned philosopher presents a lecture on astronomy using a clockwork model of the solar system called an ‘Orrery’. When it was painted, scientific lectures and demonstrations were popular forms of public entertainment. In Derby, where there was great interest in science and technology, such lectures were held regularly at the Town Hall. These events, combined with Wright’s friendship with some of Derby’s leading scientific minds, may have inspired him to paint this picture. His choice of subject was unprecedented at the time and his dramatic use of light captured the public imagination.

The painting still resides in Derby at the City museum and art gallery. 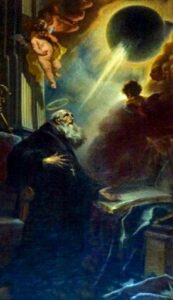 The subject of the presentation was Art and Astronomy. Mr Reynolds divided his lecture into sections such as the Moon, Astronomical instruments, comets, modern art etc. 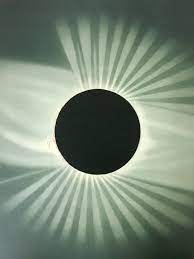 Eclipses :-
Many renaissance paintings depicted the crucifixion of Christ with a total eclipse of the Sun in the background.

Etienne Trouvelot’s Lithograph in colour of a total eclipse of sun; he observed 29th July 1878 is detailed observation in a time when photographs were unable to show such detail 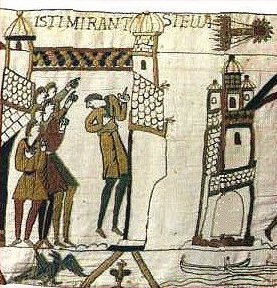 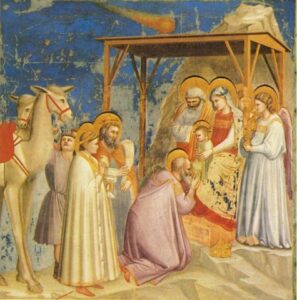 Detail from the Adoration of the Magi by Giotto 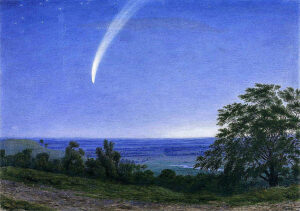 Astronomical instruments: –
Devices used by astronomers of those working in the science field have been depicted in celebrated works of art through the centuries

The Moon planets and the night sky :-
The Dutch Post-Impressionist painter Vincent van Gogh Painted in June 1889 his famous ‘Starry Night’. He painted a similar picture of a starry night over the river Rhone. 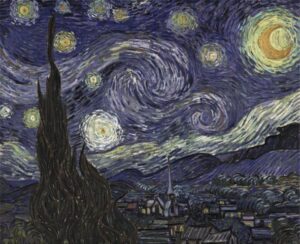 Mr Reynold included in his presentation work by the Yorkshire artist John Atkinson Grimshaw, (1836 to 1893) ‘A Moonlit Lane’, which inspired by his locality in Leeds. 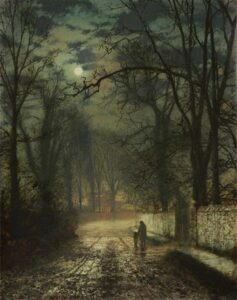 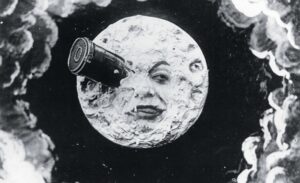 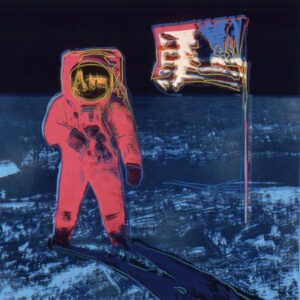 Modern art:-
Was represented by the likes of Andy Warhol (1928 to 1987), and a sculpture by the renowned American artist Alexander Calder (1898–1976). A motor in the base of his major work causes the two small red and white globes to glide at different speeds along the undulating wires in a pattern that takes forty minutes to complete. A Universe is Calder’s take on the cosmos, its abstract spheres, circles, lines and ellipses conjuring an impression of planetary motion through the Solar System. A black iron pipe provides a central axis that eventually curves as a helix, around which thinner lines arc to recall the rings of Saturn. Calder was a pioneer of ‘drawing’ in three dimensions, using wire as a means of rendering line as volume in space, in addition to his famed experiments with the element of movement in his artworks 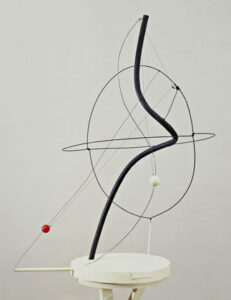 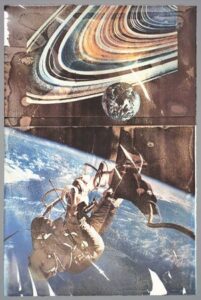 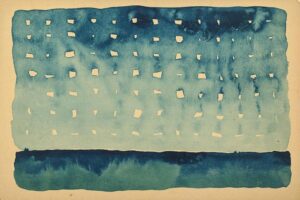 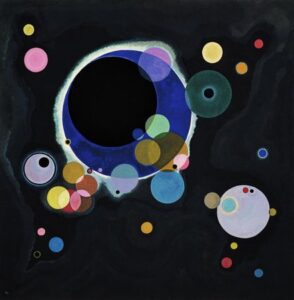 Space Art :-
Mr Reynolds looked detail at the work of Chesley Knight Bonestell Jr. (1888 to 1986). An American painter, designer and illustrator. His paintings inspired the American space program, and they have been (and remain) influential in science fiction art and illustration. A pioneering creator of astronomical art, along with the French astronomer-artist Lucien Rudaux, Bonestell has been dubbed the “Father of Modern Space art”. 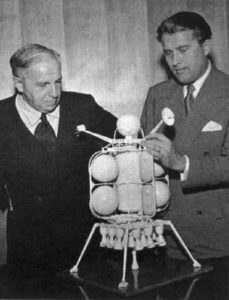 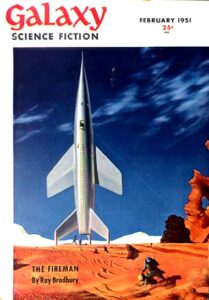 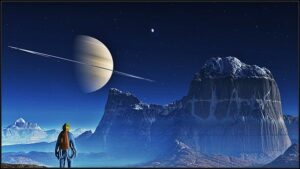 When Wernher van Braun organised a space flight symposium for the ‘Collier’s’ weeky magazine, he invited Bonestell to illustrate his concepts for the future of spaceflight. For the first time, spaceflight was shown to be a matter of the near future. Von Braun and Bonestell showed that it could be accomplished with the technology then existing in the mid-1950s, and that the question was that of money and will. Coming as they did at the beginning of the cold war and just before the sobering shock of the launch of Spunik, the 1952–54 ‘Collier’s’ series, “Man Will Conquer Space Soon!”, was instrumental in kick-starting America’s space program.

In 1986, Bonestell died in Carmel, California, with an unfinished painting on his easel. 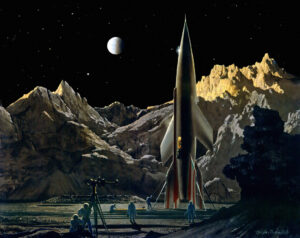