The Origins of Life 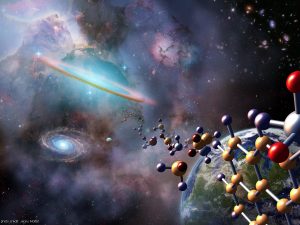 Making a welcome return to Keighley Astronomical society Was Mr Richard Turner from Harrogate Astronomy Society. He was faced with packed meeting at Steeton Methodist church hall as he presented the latest evidence on the “Origins of Life”, at Novembers society meeting.

The first thing that may be said about theories on the origin of life is that none satisfy the criteria of a scientific theory. There were no human observers of the origin of life, and it is impossible to re-enact the process. If such a process did occur, it could have left no fossil record or history. There is no way to observe or test any postulated evolutionary origin of life. All such theories are mere postulates; all related laboratory experiments are mere exercises in organic chemistry.   The simplest form of life imaginable would require hundreds of different kinds of molecules, perhaps thousands, most of them large and very complex. 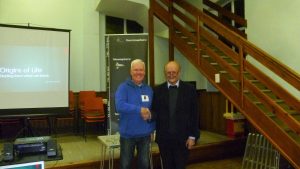 In addition to these many molecules, which would include the large and complex protein, DNA and RNA molecules, each with up to several hundred subunits arranged in a precise sequence, the origin of life would require many complex and dynamically functional structures, such as membranes, ribosomes, mitochondria (or energy-producing complexes of some kind), etc. Furthermore, life requires marvelous coordination in time and space, with many regulatory mechanisms.

Much of the rational behind the design and objectives of the space program is related to this purpose. Thus, a recent publication from NASA states “Recognizing that many scientific secrets still lie hidden throughout the solar system, NASA has a program of solar system exploration aimed at answering the following questions:

Instructional material for high schools published by NASA include sections on chemical evolution.

Many laboratories, supported by government and university funds, are devoted to pursuing origin of life theories.

There is evidence in analyses of Meteors, which are from the very creation of the universe, that elements required for the building blocks of life are present.

The Earth was heavily bombarded with such bodies not long after the planets formation. As were other planets around other stars. The primitive conditions on Earth at that time were favourable to commencing the process of life, as we know it.

The metabolism of even the simplest form of life imaginable would have required a wide variety of metabolites for its energy sources and other needs. Furthermore, vast quantities of amino acids, the building blocks or subunits of proteins; purines, and pyrimidines, constituents of DNA and RNA; and sugars, constituents of complex carbohydrates and of DNA and RNA, would have been required. 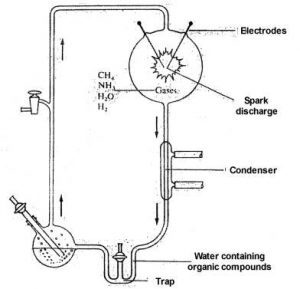 The Miller “origin of life” apparatus from1953

In 1953 Stanley Miller announced the first successful synthesis of amino acids and of a few other simple organic chemical compounds under assumed primitive earth conditions. Since Miller’s experiment, other origin of life chemists have produced a variety of amino acids, sugars, purines, pyrimidines, and other compounds under a variety of conditions and using various gases.

To continue the content of Mr Turners presentation look at the following video
https://youtu.be/57merteLsBc 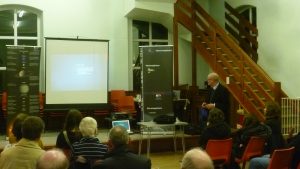