Constellation of the Month May : Virgo 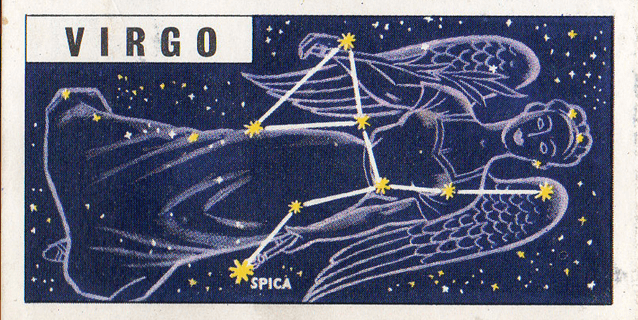 Virgo (the constellation of the Virgin) In mythology Virgo was identical with Astraea, the daughter of Jupiter and Themis, and the goddess of justice. During the golden age Astraea ruled the world, but when mankind altered its ways the goddess was so disgusted that she returned to heaven. I think we know how she felt with world affairs as they are.
Spica, the leading star of the group, is best found by continuing in a sweep from the Great Bears tail through Artcturues. There are several other fairly bright stars in the constellation. Note the ‘bowl’ shape, which lies between Spica and Denebola in Leo. Postvarta is a superb binary with almost equal components. At present it is easy to separate them with a small telescope. It is a system with a period of 180 years, and is gradually closing up as seen from earth, so that during the coming years it will become a difficult object to split.
The constellation of Virgo is the centre of the closest large cluster of galaxies, and can easily take up several evenings of observing time. The galaxies of Virgo are about 70 million light years. As such, these galaxies show a lot less detail. But what they lack in quality, they make up in quantity. In some areas, it is difficult to move a whole telescopic field of view without seeing one or more galaxies. A good star atlas is a must in this region for identifying all the galaxies visible in a telescope of moderate aperture.

M-58 With dimensions of about 5’x2′, this is one of the larger galaxies in this region. It is spindle-shaped, oriented northeast to southwest, and has a broadly concentrated centre. There is a relatively bright star nearby to the west.

M-61 This galaxy is a face-on spiral, about 6’x4′, oriented north northeast to south southwest. It is fairly even in brightness except for a stellar nucleus and some faint mottling on its eastern and western sides.

M-84, M-86 These relatively bright galaxies are very similar in appearance, and are visible in the same low-power field of view. M84 is round, about 3′ in diameter, has a large 1′ diameter core, and a stellar nucleus. M86 is larger (about 4′ in diameter), and fainter, and also has a stellar nucleus

M-87 This is a very bright galaxy, about 4′ in diameter, with a large core and non-stellar nucleus.

M-104 The Sombrero Galaxy. This is one of the finest showpiece objects in the sky. This beautiful edge-on galaxy is 8-10’x2′, oriented E-W, and has an obvious central bulge, with a distinct dark lane running the length of the galaxy. This is an object, which should not be missed.

NGC 4179 This galaxy is about 3’x1′, extended NW-SE, with very thin tapered edges. It is sharply brighter to the centre with a stellar core.

NGC 4753 Rather bright, this galaxy is about 4’x2.5′, oriented east-northeast to west-southwest. It is broadly concentrated to the centre, with a stellar nucleus. At times, dark markings can be seen at the northeast side.

NGC 4762 This galaxy reminds one of a smaller version of the well known edge on galaxy, NGC 4565. It is about 4’x0.7′, oriented northeast to southwest, and averted vision hints at a dust lane.